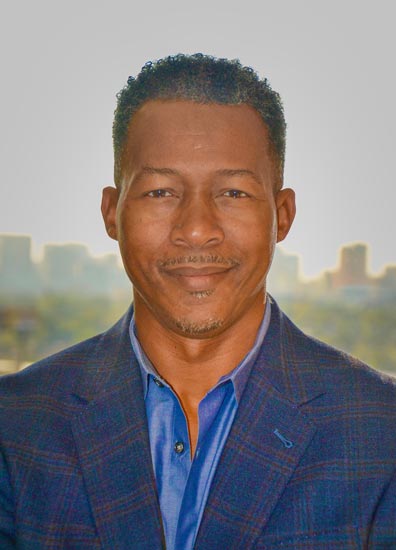 Bert has experienced the highs and lows as a professional athlete and the stresses as a businessman, husband, and father. He offers solutions to navigating a complicated and stressful life as an athlete and guidance to individuals as they transition into a life after their professional career.

Bert has helped numerous individuals into successful new phases of their lives. He offers practical advice for coping with family, relationships, child rearing, business, finances, and other areas that influence one’s life.  He offers proven, practical, and real-life solutions to the myriad of problems unique to the professional athlete.

Bert Emanuel was born in Kansas City, Mo. but grew up in Houston, Texas. Bert has achieved much as a professional athlete, entrepreneur, and family man.

Bert had an outstanding NFL career which was historic on several levels. First, he was one of the four players on the 1995 Atlanta Falcons team to amass 1,000 offensive yards in a single session, which was a first in NFL history. In addition, his completed “catch”, as ruled by the referee on the field, in the 1999 NFC Championship game for the Tampa Bay Buccaneers against the St. Louis Rams was reversed and ruled an incomplete pass. This ultimately became the play that created the Bert Emanuel Rule.  The rule changed the definition of a completed catch for the NFL and eventually for college, high school, and youth football organizations.

Many of Bert’s life successes are rooted in his accomplishments as an athlete and student at Langham Creek High School.  He was the Texas State Track & Field long jump champion and received over 200 football college scholarships during his senior year. He was drafted by the MLB team Toronto Blue Jays before graduating from High School. He graduated with a 4.0 GPA and was a member of the National Honor Society. Upon graduation, Bert attended UCLA where he competed as a track and football athlete while majoring in Engineering. After 2 years of enrollment at UCLA, Bert transferred to Rice University. During the spring of his first year at Rice, he was additionally drafted by the MLB Pittsburgh Pirates. Two years later he graduated from Rice University with a B.A. in Managerial Studies and was the #1 draft pick of the 1994 NFL draft for the Atlanta Falcons (chosen 45th in the overall draft).

Upon retirement from the NFL, Bert became an entrepreneur and secured a US Army military contract providing high tech base layer performance apparel for all deployed female soldiers. His company, KAOS Worldwide, LLC provided over 900,000 units through the Army’s PEO Soldier Initiative. Bert expanded his entrepreneurship and developed and manufactured uniquely specialized products for NASA by redesigning the liquid thermal garment (LTG) worn by astronauts during space walks. The LTG garment was also used by US Special Forces during cold water missions to keep the soldiers warm.

Bert continued to expand his inventive entrepreneurial passion and began a partnership with several medical doctors to reimagine and recreate the traditional scrub for medical professionals. He addressed hospital acquired infections (HAI) by developing scrubs with embedded anti-microbial technologies in fabrics and addressed the visual image and appeal through a more professional “suit” design. The new product was branded and trademarked as the MEDSUIT and Bert became the co-inventor of 4 US patents. He added to the anti-microbial technology creations by providing licensed fabrics and surface coatings for industrial, commercial, personal use, and anti-viral athleisure wear for consumers.

Bert is married to his lovely wife Teri of 28 years and is the proud father of 5 kids. Bert and Teri have had the privilege of raising 5 incredible children. The compassion for their kids along with exceptional parenting skills has allowed each child to excel in their unique ambitions and accomplishments.